Here I review the growth we have observed in our experiment. The total growth was less than we anticipated, but we still produced enough new skeleton with significant differences in growth rates and sensitivities to proceed forward with most of our tests.

The peaks in the standard deviation are almost certainly caused by aquarium cleaning days when corals are removed into a separate bath and the sensors are capped causing logging errors. CO2 injection is turned off during these times so the aquariums themselves are not experiencing the conditions that the logged data are suggesting. The following graph filters out these spiked values which were programmatically identified by occurring during scheduled cleaning times and affecting multiple aquariums at once since cleaning occurred at the same time for all aquariums.

Variability is still present, but the extreme spikes caused by cleaning have been removed. Thus, any variability that remains is due to durafet error or experimental variability that affected the corals. For example, the durafet for T15 had much higher variability than the other aquariums. However, I believe this to be negligible.

500mL water samples were collected every Tuesday for analysis of the complete carbonate chemistry suite.

The bottles were not taken at exactly the same time of day, and thus the programmed variability will be apart of the variability of each sample along with sampling error, durafet error altering amount of CO2 injected into aquaria (shown above in the LabView data), etc. 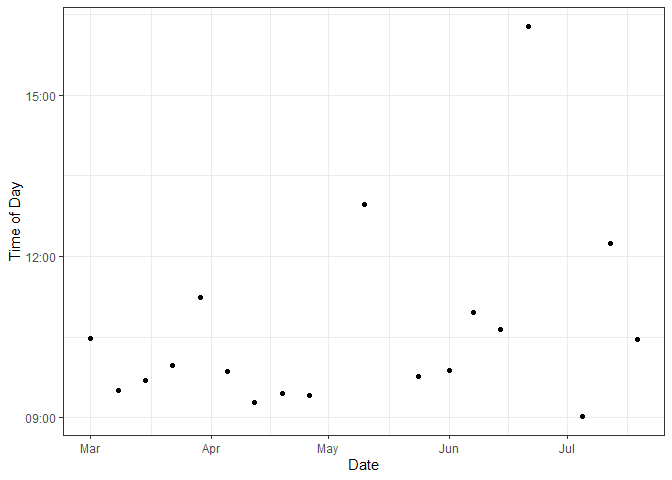 Following April 15 (Weeky 5), the declining health of the corals stabilized and began to split amongst treatment groups.

There is some obvious genet-specific responses.

No observable differences of mean calcification rate when comparing within treatment groups.

Here I created a mixed effects model model to account for the lack of independence brought upon by having multiple corals grown in the same tank and the possible tank-specific effects that may have affected calcification rates. Including this random effect decreased the AIC from 66 to 31 as compared to a fixed-effects only model, and therefore the random tank effect should be included for analysis.

As a reminder, here is the fixed effects model as shown above:

Here is the mixed effects model with the tank identity set as a random factor to give each tank its own, random intercept. Notice, including the random effects decreases the absolute value of the AIC. Therefore, this new model better describes the data.

Pattern is the same as above with the fixed effects. Significance has decreased (p values increased) for AC-2 and MB-C, suggesting that there was some variability between tanks in the same treatment (T13 v T15 and T14 v T16) but that this within treatment variability was not significant enough to change our conclusions. Thus, we fail to reject our null hypothesis that there are significant differences between individual genotype’s susceptibility to OA.

AIC tells us the mixed effects model better describes the data. Post-hoc testing further tells us that indeed SI-A’s linear extension rates were significantly different between treatments (p<0.05), yet all other genotype’s were not.

Takeaways and Next Steps

Overall growth was less than hoped for. However, there is enough new skeleton for nearly all the powder tests that we want to conduct: FTIR, TGA, boron isotopes, and Raman. There is enough powder to run XRD on some samples from genotypes AC-2 (OA=2, control=8) and SI-A (control=5) and a single sample of Cheetos-B. The lack of even replication though may preclude analysis of XRD. For nanoindentation tests, we should have enough new growth to run on a majority of samples.

Linear extension was measured by maximum vertical height as measured with calipers. We additionally have initial 3d scans of all corals and post 3d scans of a subset of 48 corals (n=3 per genotype per tank). From this data, we can extract surface area to volume ratios and see how this changed among genotypes and treatments. This analysis still needs to be done. We can also more accurately measure total linear extension of the corals which may have curving or branching morphologies.

Among control corals, I visually noticed significant plating of tissue and a veneer of aragonite above the acrylic tags. This was almost completely absent in OA corals. I can take photos of each coral and calculate surface area of plating.

The micro-ct scan is currently out of service. We can use the large ct-scanner to determine bulk density. The scanner has a resolution of 0.1mm/scan so we can measure the density of the new growth. This growth is isolated to the highly variable apical tips which may cause some problems. See this post which discusses the ct-scanning analysis of apical tips done on Langdon’s OA corals.