Thermogravimetric analysis (TGA) is a quantitative materials technique that linearly heats a sample and simultaneously measures its mass as the sample degrades. By looking at the percent decomposition over discrete regions, we can characterize the coral sample’s fractional constituents. The heating occurs in an inert environment (N2 gas) to avoid sample oxidation.

For analysis, we can use the first derivative of the TGA curve (called the DTG curve) to identify the start, peak, and end temperatures for each respective region. Then, we can integrate between the start and end temperatures to calculate the percent degradation. For example, an aragonite coral skeleton may have two peaks: decomposition of the intracrystaline organics at approximately and the decomposition of CaCO3 to CaO and CO2 at approximately 600-800°C (Fig 1.). 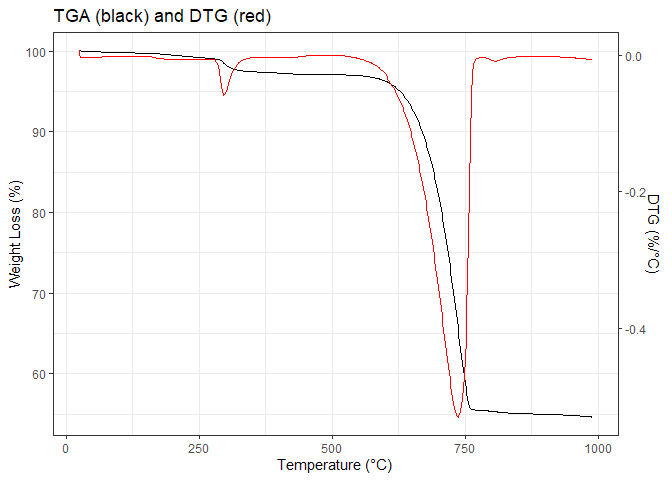 In this document, I review the current coral TGA literature, describe the samples I have tested thus far and the proposed analysis methodology, and begin to analyze my initial results.

There are a handful of publications which have used TGA to analyze coral skeletons grown or collected under acidified environments. The most interesting ones in my opinion are Coronado et al. 2019, Moynihan et al. 2021, and Prada et al. 2021 for their use of the method and the findings they present. A complete list of references I draw upon is included below.

This paper sought to disentangle the biological effects on calcification to make corals a more reliable paleoclimate proxy (i.e. better their understand vital effects). They cultured Stylophora pistillata under pH 8.2, 7.6, and 7.3 and found differences in the aragonite precipitated by the corals under these treatments due to the increased amount of intracrystalline organic matrix and water content as measured by TGA.

They heated at a rate of 10°C/min to 1000°C, but limited their analysis to discrete regions from ambient to 520°C, focusing mainly on the decomposition of water from ambient to 275°C and bulk organic matrix, OH groups, and possible ACC from 275-520°C (Table 1). There was no clear pattern for water, but for the 275-520°C group there was a lineal increase across treatments(Fig. 2).

Their analysis looked at TGA from 20-500°C, which was achieved by heating to a 200C isotherm for 5 minutes followed by a 10°C/min ramp to 400°C and then followed by a 20°C/min ramp to 500°C. They used the DTG curve to identify the temperature of maximum weight loss change (Tmax) and then defined three regions to determine percent change: 175 to 225°C, Tmax-50 - Tmax+50°C, and Tmax+50 to 500°C. They measured micro-mechanical properties with an nanoindentation test. 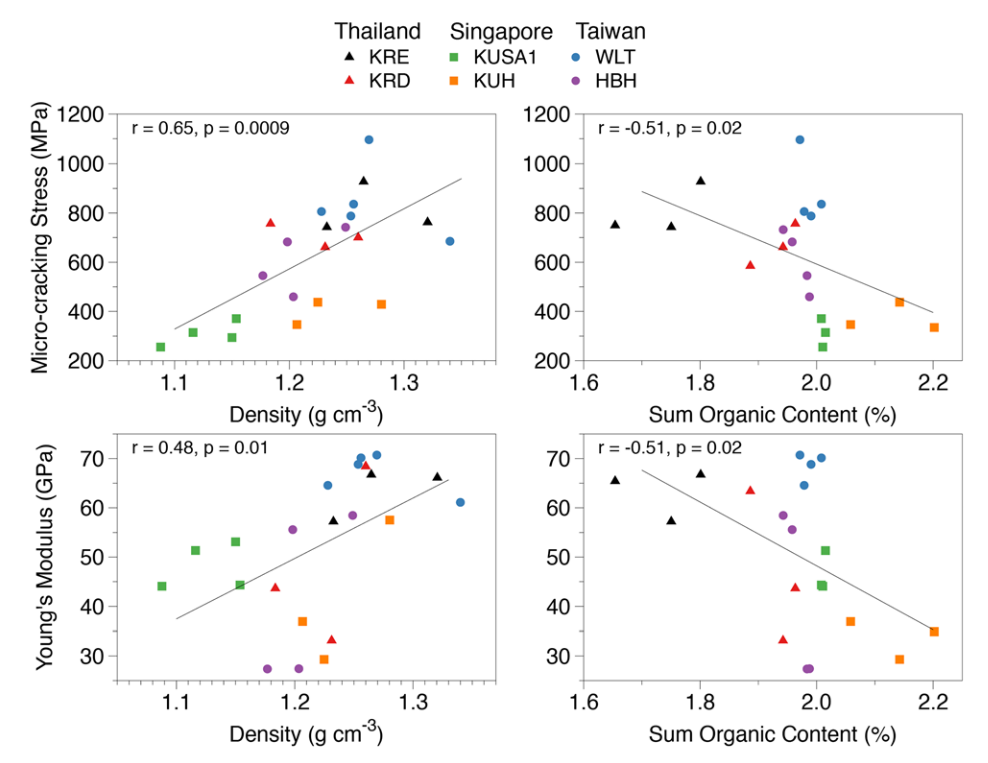 This paper looked at four populations of naturally occurring reefs in Papa New Guinea, two located by a CO2 seep and two nearby control sites. They measured 32 samples in total (10 for each control and seep site at Dobu and 6 for each site at Upa Upasina). Their analysis looked at TGA from 20-600°C at 10°C/min incremeents with a 120°C istotherm for 5 minutes to stabalize the removal of adsorbed water. They then focussed their analysis on the region from 125-250°C (structured water molecules) and 250-470°C (organix matrix).

They only found significant differences between sites in intraskeletal strucutred water and intraskeletal OM at Upa Upasina, suggesting that differences may not be solely environmentally controlled and their may be physiological control of these parameters which are different between different populations. Though further evidence to support this claim is not presented here. 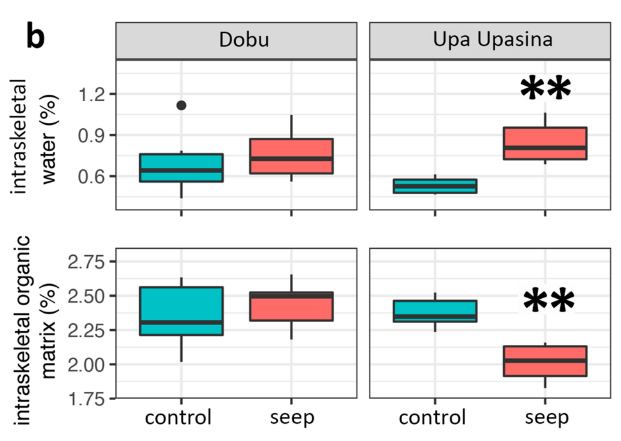 Each of these papers analyzed TGA data slightly differently. However, there is general agreement in the organic matrix limits (250-470°C) and the structural water limits (150-225°C). There is potentially other regions of interest too including the crystallization of ACC (300-330°C, ~316°C) and the monotropic transformation of aragonite to calcite (411-440°C, ~418°C). See section below where I propose the analysis I will undertake.

The corals for this first batch of analysis come from Allyson Demerlis’s recent project where she investigated gene expression during a rapid bleaching experiment of 3 Acropora cervicornis genotypes. Some of the corals underwent a thermal stress-hardening treatment where the corals were exposed to a daily variable temperature which is believed to increase a coral’s bleaching resilience. The corals exposed to the high temperatures (36°C) had high amounts of mortality and I took these skeletons to analyze. 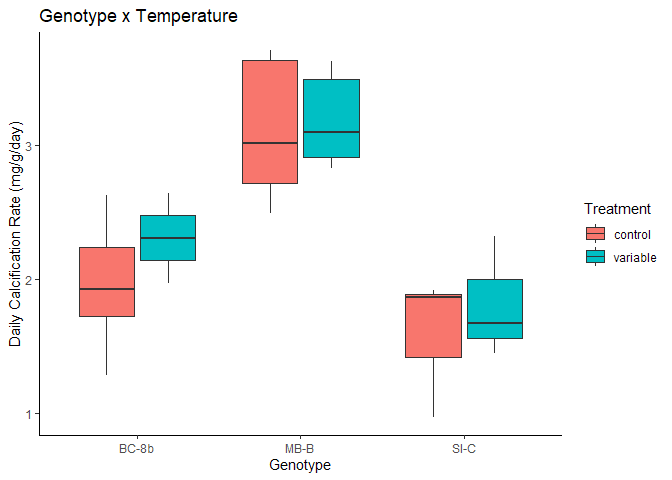 Thus, we are conducting these tests with a special focus on genotype MB-B to see if its faster calcification rate results in any observable differences in skeletal properties.

With the reviewed literature above, I synthesized the analysis I plan to conduct with the goals of 1) automating the analysis; 2) characterizing the structural water, organic matrix, ACC, aragonite to calcite, and calcium carbonate regions; and 3) analyzing if there are any propertie conserved among genotypes.

This removes the observed noise and when graphed below, you can see that the extract points correspond with the inflection points you can visualize.

The other ways I will analyze the data will be over discrete intervals including, 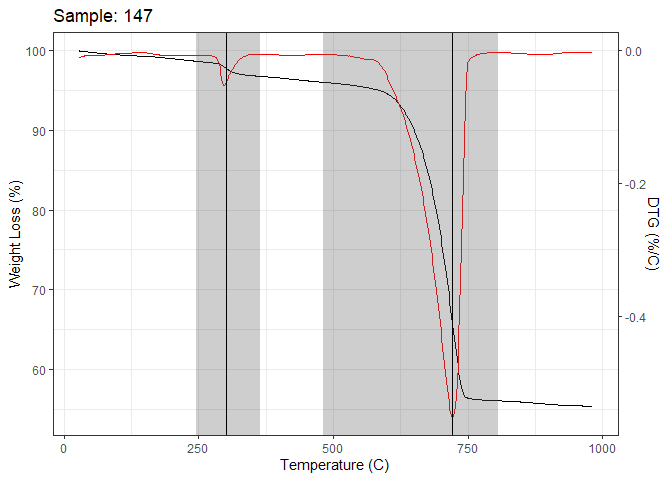 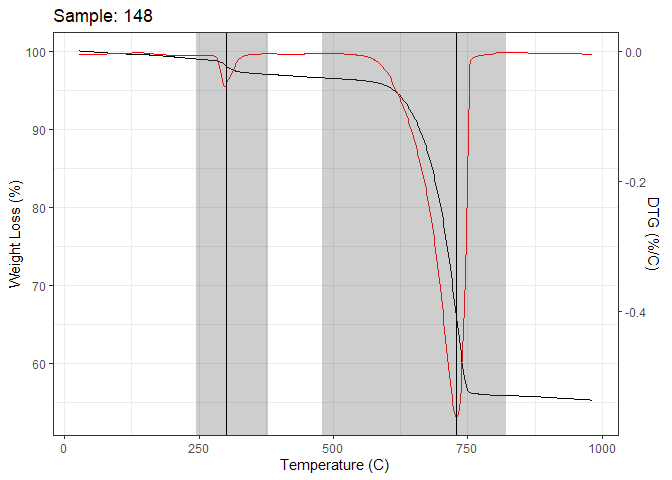 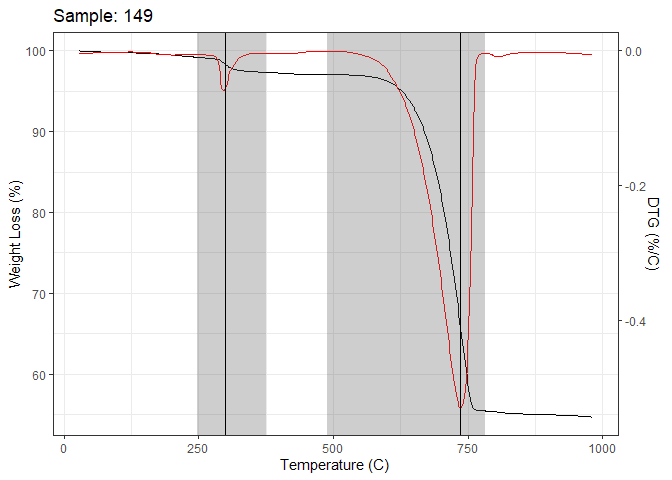 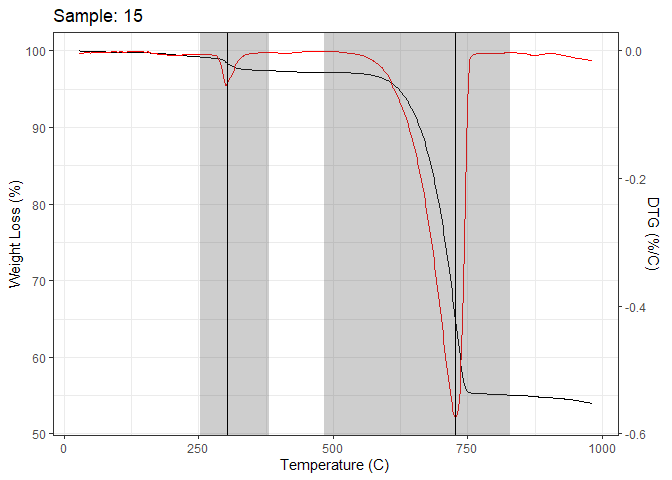 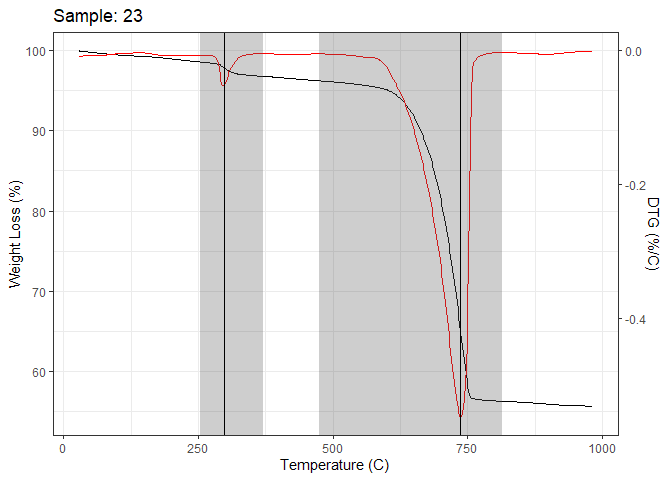 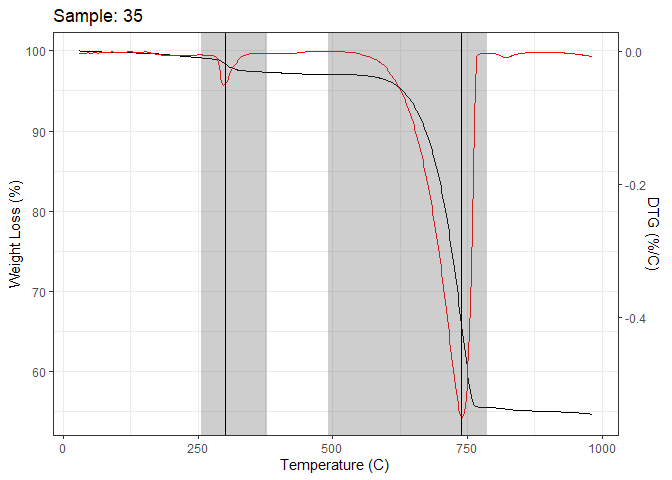 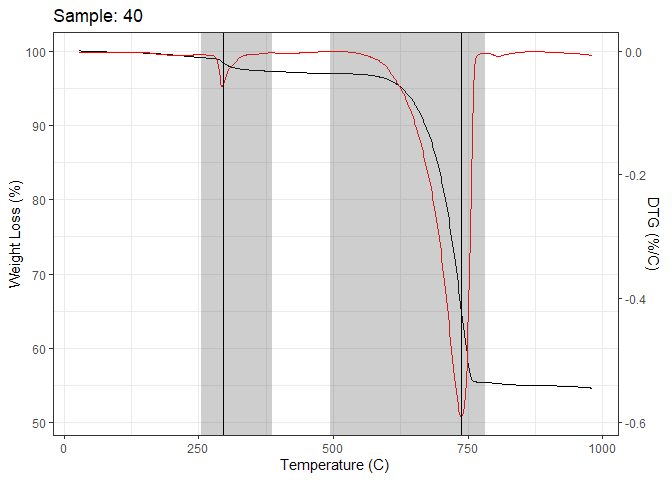 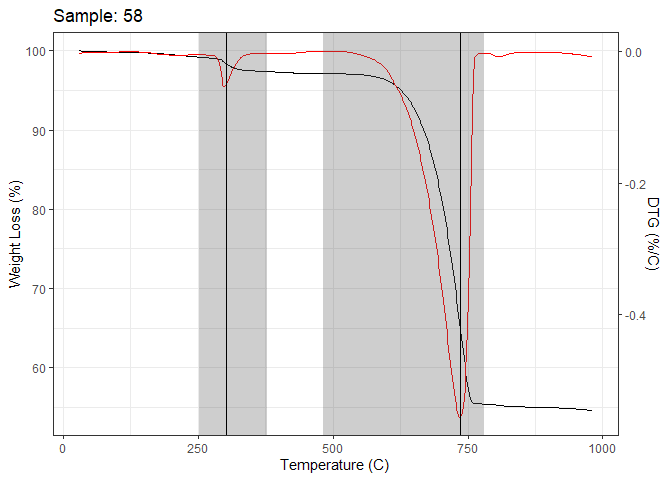 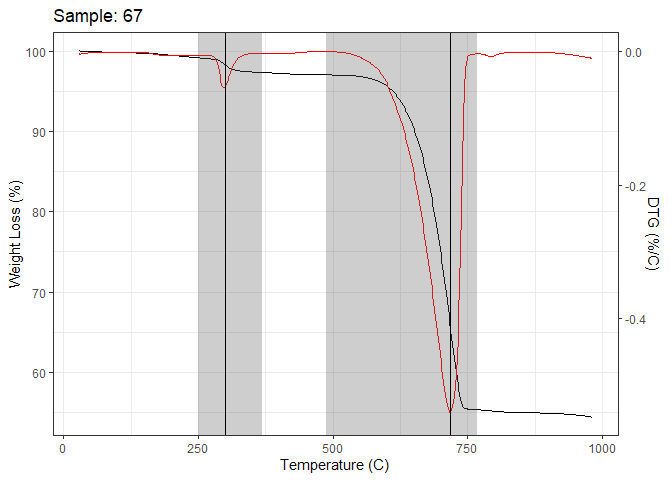 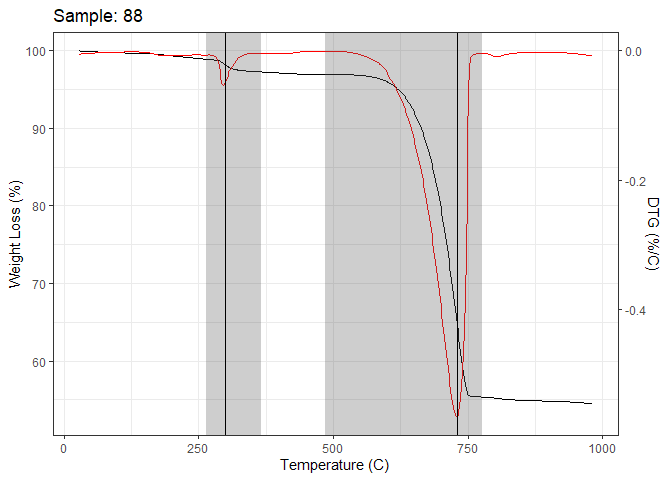 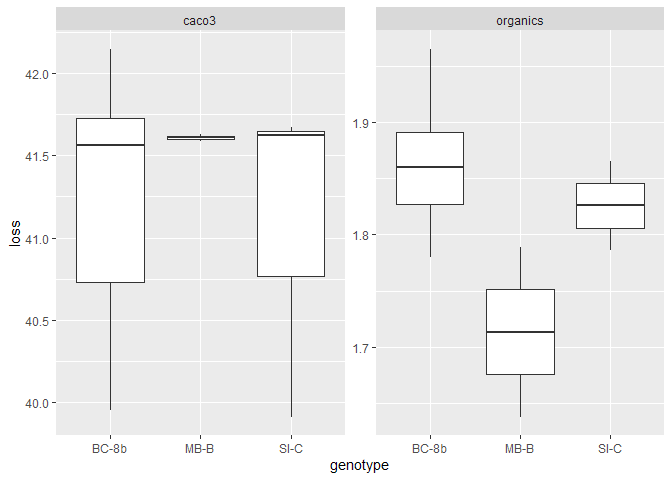 The organics figure looks like MB-B has a slight difference, but looking at the y axis its median is only 7% less than the median of the other two genotypes and currently not showing significant genotype differences (F=3.372, p=0.094). However, we still have a handful of more samples to run. FTIR analysis may help classify the specific differences rather than bulk concentration of organics quantified here.